Inhumanity Unbound: the Case for Socialism

Nothing exposes the hypocrisy, arrogance, and selfishness of capitalism and its backers like a major threat or catastrophe.

While The Wall Street Journal (3-19-2020) grudgingly reports this international solidarity, it is also compelled to admit that “many people feel let down by the European Union… No other EU countries responded to an Italian plea for masks earlier in March, and German authorities temporarily impeded deliveries of medical supplies to Italy.” The head of a European think tank remarked: “This is a shocking failure of European solidarity. The impression in Italy, Spain, and Serbia and so on is that the weaker links will be left alone.”

The Italian and Chinese governments announced that PRC will supply needed ventilators and face masks. Balkan countries unable to acquire supplies from the EU are also getting assistance from the PRC, according to the WSJ. Serbian President Aleksandar Vucic bitterly commented: “European solidarity does not exist. It was a fairytale.”

Contrast this commentary on European indifference with the arrogant self-righteousness of the policy of “open-borders” as formerly proclaimed by EU leaders. When workers expressed their reservations about unlimited immigration eroding wages and benefits in the EU, the Euro-leadership indignantly charged “xenophobia.” Waving the banner of human rights, the EU chiefs welcomed immigrants-- mostly the victims of imperialist aggression-- desperately looking for jobs at any cost, while appearing to take the moral high ground.

Once the “reserve army” overflowed to create stress on the EU safety net, the welcome mat was quietly removed.

European workers understood the simple fact that in a capitalist economy the labor of workers is a commodity like any other element in the productive process and that capitalists seek to purchase that commodity as cheaply as possible. They anticipated that humanitarian sentiments were too often a cover for cheapening the cost of labor.

The formerly putative human rights crusaders of an EU without borders are now panicked in a mad dash of self-preservation, hoarding resources and closing borders. Today’s pandemic crisis exposes their hypocrisy.

But neither neglect nor arrogance is a monopoly of the capitalist European Union. It is now widely acknowledged that the austerity imposed upon the US public sector since the crash of 2007-2009 bears a responsibility for the lack of funding for the agencies, like the Center for Disease Control (CDC), that needed to address the threat from the coronavirus.

In addition, the CDC displayed an unforgivable hubris, ignoring the international efforts to contain the virus and the lessons learned. In accounts from as diverse sources as National Public Radio and The Wall Street Journal, we learn that the CDC chose to develop its own testing kits for the virus, ignoring the existing technologies of the World Health Organization and the PRC.

When their own kits went into production, they proved faulty, setting the program back. Rather than turning to existing internationally used designs, the CDC sought to make its own corrections, further delaying production. The CDC vastly underestimated the virus’s deadliness and its contagion. The spread of the virus is rapidly outstripping the availability of testing kits, attesting to the conceit of Make America Great Again.

Despite the lack of testing kits in the US, many have noticed that celebrities, sports figures, politicians and others of our “betters” have cut the line and acquired tests before the most needy-- the ugliest side of the inequality of class society.

Also, reliable accounts have surfaced that some US elected officials have used their privileged information to enable them to liquidate their equity portfolios before the great March stock market collapse.

Workers employed in low-wage, service-sector jobs are the most vulnerable to intensive and persisting human contact and potential infection and are the least able to sustain the economic consequences of the pandemic.

It is not true that we are all in this together. Some are in it for themselves.

For any thinking observer, the coronavirus pandemic is fast becoming an argument for socialism. Even a bitter enemy of public ownership, planning, and economic equality like The Wall Street Journal caustically acknowledges that the PRC’s remarkable defeat of the coronavirus epidemic was achieved with the quickly mobilized, effective state-owned-enterprises (SOEs). In a tellingly titled article (China Steps Back From Market Economy, 3-19-2020), Lingling Wei cites the 20,000 SOE construction workers and supportive public enterprises that built two hospitals with 2,600 beds within two weeks, an achievement impossible in the capitalist West. Lingling cites an official: “It’s like in a battlefield, and state-owned enterprises are the ones who can act fast and decisively.”

The coordination of SOEs was formidable, with petrochemical enterprises working to produce materials for masks and pharmaceuticals. State-owned housing ordered reduced rents by “tens of millions of dollars.” Despite the reduced production necessitated by social isolation, the central government pressed SOEs to maintain employment, even “hire more, especially college graduates.”

The WSJ concedes that “Many private manufacturers are struggling to restore production, yet more than 95% of some 20,000 industrial companies controlled by the central government are churning out masks, medicines, steel, heavy machinery and other products-- keeping workers on the job.”

Western commentators bemoan the success of the SOEs, interpreting it as a setback for the hope of privatization (so-called “market reforms”) in PRC. One former WSJ writer complained: “If and when the outbreak fades, the conclusion is inevitably going to be that the overwhelming exercise of state power saved China.”

In exemplary acts of solidarity fully consistent with its long history of internationalism, tiny socialist Cuba, suffering a criminal US blockade and brutal sanctions, is offering doctors and drugs to several stricken countries.

When the US refused to allow the British cruise ship, MS Braemer, to dock, Cuba met its humanitarian duty and allowed its passengers to disembark and travel home by air.

The contrast with Western, capitalist efforts is striking. The PRC (and DRVietnam) have largely arrested the virus. As of March 21, the total cases per million of population is lower in the PRC than in the US and the UK, countries only at the beginning of their infection cycle. Italy had 6,557 new cases compared to only 41 in the PRC (4,759 in the US). 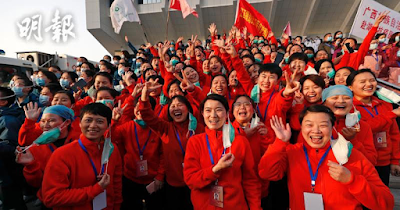 Chinese health workers celebrate by removing their masks for the first time in months as the last of the temporary Covid-19 treatment centres closes in Wuhan, China.

In the US, there are far too few test kits, masks, and ventilators. New York City hospitals are overwhelmed. State administrations and the Federal government are in dispute over responsibilities while disaster looms.

And tragically, the political and economic elites are more determined to rescue markets and corporations than humans. Trillions have been earmarked to bail capitalism.

The idiocies, irrationalities, and unnecessary injuries of twenty-first-century capitalism are coming into full, tragic view.

Posted by zoltan zigedy at 1:32 PM

Indeed Greg. European workers could actually raise the banner of socialism and it just might engender a resounding response from all the widows and balconies!

My email in-box is full of messages from friends sending jokes and upbeat stories to bring cheer in this trying time. But Greg's blog here is the most uplifting of all.

Excellent article as always. Thanks for this.

some movies of note